The latest news about Biomass Research

Solid biomass availability was assessed in a recent Biomass research study, calculating how much woody residues can be obtained in Sweden, Finland, Baltic states, Germany and the Netherlands. The inventory covered waste streams available from forest management, wood and paper industries, agriculture, households and urban areas.

They study was done at the request of Dutch chapter of Friends of the Earth (www.milieudefensie.nl). Following concerns about ambitious bioenergy policies in the Netherlands and other countries in the region.

Forests and wood and paper industries in North Europe (Sweden, Finland and Baltic states) generate over 47 million tonnes of residues (expressed as dry wood equivalents). Half of this is produced in Sweden. Considerable amounts of woody biomass can be recovered from other sources, such as arable crops (4.5 million tonnes dry materials). 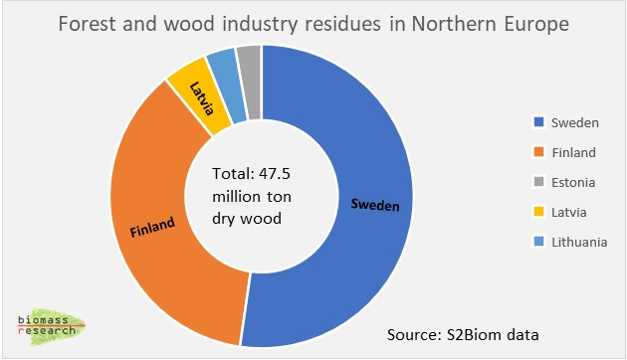 German forest and wood residues – annually amounting to 14 million tonnes of dry wood – do not cover its demand but addtional materials can be sourced from arable crops, gardens and food industries. This is also the case in the Netherlands, which has relatively few forest resources.

Sweden currently is the only country which provides sufficient residues in forests and wood / paper & pulp industries to cover its projected domestic biomass use. Most countries, however, have room to increase wood extraction as current harvesting volumes are below annual forest growth. Consequently, wood volumes in the North of Europe still are increasing. Since 2000, forests sequestered nearly 500 million tonnes of carbon.

Current solid biomass demand in the Netherlands can not be satisfied with forest and wood industries alone. Additional biomass will be needed from arable crops, garden waste, parks, lanes and landscape elements. Residue availability in other countries is limited following ambitious bioenergy policies in many countries.

The inventory processed national and international (FAO, EUROSTAT) forest and wood statistics, linking them with EU biomass inventory studies and a continental biomass availability projection (see www.s2biom.eu). Availability of reliable biomass supply and demand data is a crucial element in the ongoing debate on the role bioenergy can play in providing sustainable renewable energy to replace fossil fuels and cut greenhouse gas emissions.

A copy of the report can be found here. (Only available in Dutch.)

The Nederlandse Organisatie voor Wetenschappelijk Onderzoek (NWO) recently approved a project for researching sustainable maritime bio-fuels. The organisations Solidaridad and Platform Duurzame Biobrandstoffen will make contributions to this project, as will Biomass Research on behalf of Federatie Bio-economie Nederland.

The multidisciplinary research project will be led by Dr. Lotte Asveld of the Technische Universiteit Delft and will start in 2020.

Read the article from the NWO about the project here. (Only available in Dutch.)

Anaerobic digesters for a better life

Many poor rural areas offer very few opportunities for their inhabitants. When soils are poor and rainfed is low, as is the case in most of Killifi county in the coastal zone of Kenya, farmers and their families have to rely on rainfed agriculture with low external inputs. Low yields, long distances and poor access to advice, inputs and markets offer effective barriers for development. Only few market opportunities are available, in this case cassava, cocos, chillies, dairy cattle and extensive poultry production.

Under these conditions, anaerobic digestion (AD) offers perspectives for poor smallholder households. Using the dung of just a few cattle, it allows them to generate their own cooking fuel. Replacing firewood, which often requires hours per day to collect, improves indoor air quality and saves women and children from serious respiratory problems. Moreover, the residue of the AD process, digestate (or bioslurry), an effective organic fertilizer, is available at no cost. During digestion, nutrient availability (especially nitrogen and phosphorus) is improved, and bacteria are killed. Tests have shown that bioslurry can replace expensive chemical fertilizers, even reducing their effect on soil acidification.

Various digester types are available nowadays in rural Kenya. Next to the traditional brick and mortar digesters, dug into the ground for stable temperature and support, various soft plastic alternatives are on offer including tubular, tunnel, hut-like models. Hard plastic digesters are made from drums or water tanks. While all models have their advantages, they remain vulnerable for cracks and wearing. Some models are covered to protect them from the sun as UV can lead to strong wearing. Essential for all models is a stable feeding regime with diluted manure as well as sensible digester management.

At Biomass Research, we study optimal digester management, allowing poor farmers and their families to save on firewood, improve their health, and realise better crop yields and incomes. We are open for collaboration. Are you working with smallholder farmers, looking to improve their living conditions? Are you advising and monitoring smallholder digesters? We are happy to discuss how to enhance digester management and performance. Send us a message, or mail us at hans@biomassresearch.eu. 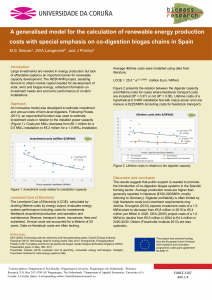 Large investments are needed in energy production in order to realise ambitious goals for reduction of greenhouse gases presented in the Paris Agreement. Entrepreneurs are facing major challenges in developing new renewable energy capacity. Lack of affordable capital is one of the most important barriers for renewable capacity development. The RESFARM project, assisting farmers to obtain market capital needed for development of solar, wind and biogas energy, collected information on investment needs and economic performance of on-farm installations. An innovative model was developed to estimate investment requirement and annual costs for operation and maintenance of farm-level digesters from literature and practical experiences. Literature and field survey data were analysed and applied using an exponential function to assess investment costs in relation for new biogas installations in Spain. Investment costs range between €2  and €6 million per per MWel installation capacity depending on digester size. Highest costs were found for small (500 kWel) installations, with costs decreasing fast with increasing capacity (Figure 1). 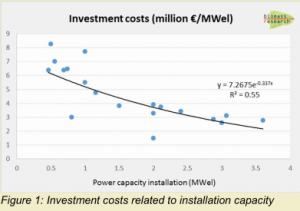 Electricity production costs were calculated from lifetime costs and electricity output. Levelized Cost of Electricity (LCOE) are used to evaluate investment needs, feedstock costs, and operation and maintenance (finance, transport, taxes, insurances, fees and subsidies) in comparison to fossil and other renewable energy systems including wind and solar. Average production costs exceed reports from literature which mostly refer to Germany. Results suggest that support is needed to help develop co-digestion biogas systems in the Spanish farming sector. Digester profitability is often limited by high feedstock costs, but investment costs may be expected to decline. Viable biogas development will depend on availability of affordable feedstocks (including crop and industrial residues), capital and cost-effective digester management. [1] Breure MS, Langeveld JWA, Pombo J, 2017. A generalised model for the calculation of renewable energy production costs with special emphasis on co-digestion biogas chains in Spain. Poster presented at the European Biomass Conference and Exhibition, 12-16 June 2017, Stockholm

The need for implementation of renewable energy is getting more and more urgent. Valorization of crop and household residues provides a promising source of energy. Currently, however, a large part of residues in agriculture and food production are hardly used. Many of these can be applied for the generation of energy via anaerobic digestion but we have limited insight in the relation between the composition of the residues and biogas potential. This holds especially for the concentration of nitrogen (N) and phosphorus (P) in residues. Students of the HAS University of Applied Sciences in Den Bosch (Netherlands) tested the relation between low, medium and high N and P concentrations (depicted as C/N and C/P ratios, respectively) and biogas yield in an experimental setting. Samples of residues were digested in small flasks for a period of three weeks. Feedstocks have been included that represent residues high in starch (potato peelings), proteins (silage maize) or fat (coconut milk). 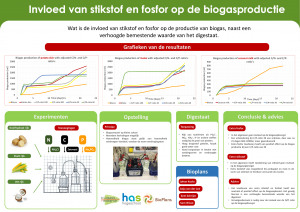 Outcome of the tests has been described in a report and a poster that was presented in a seminar at the university. Results show little impact of (variations in) nitrogen and phosphorus concentratins. Highest biogas yields for potato skins were realised at natural nitrogen (C/N ratio 8) and phosphorus (C/P 19) concentrations. For maize, a C/N ratio of 30 gave the best results (natural C/N value was 46), while lower phosphorus concentrations (higher C/P values) outperformed natural C/P ratio (which was 9). Results for coconut milk were inconclusive. 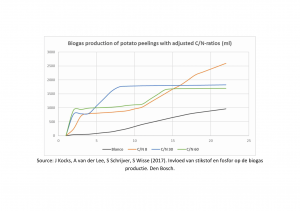 Results are in line with literature. Optimal C/N ratio is generally reported to be around 30 although lower values have been presented as well (e.g. Guarino et al., 2016). For phosphorus, normally high to very high C/P ratios (350; Ghasimi et al., 2009) are recommended.

(in Dutch: Het rapport van Biomass Research [..] geeft een veel genuanceerder beeld van de werkelijkheid over Food-or-Fuel en ILUC dan NGO’s ons willen doen geloven). Press release Press release Biofuels compete little with food production – so far From our press release WAGENINGEN, The Netherlands – A week after the environmental committee of the European Parliament (EP) capped biofuel production from food crops to a maximum of 5.5% because of its effect on food security, a new study reveals food production is not suffering much from the use of corn, wheat or palm oil in biofuel production. Calculating land use changes in 34 countries including Brazil, the USA, and the EU, a team headed by Hans Langeveld demonstrated biofuels are not likely to compete with food production – or cause major deforestation, usually indicated as indirect land use change (ILUC). According to the study, between 2000 and 2010, urbanisation claimed twice the amount of land used for biofuel expansion. It contains other revealing data. “Increases in crop harvested area compensated biofuel expansion”, says Langeveld. “It even made up for loss of agricultural land due to urbanisation”. Farmers adapted to increased demand for crops. “Not so much by opening new land”, he adds, “but by using it more effectively”. Farmers thus managed to harvest more crops – from less land.

“It does not mean that biofuel production never affects food production”, he adds. “Competition for land does occur. Locally, biofuel producers may use land that was used for other crops.”

The researcher emphasises that this practice should be discouraged.

“Existing land rights should be respected – at all times”.

The report arrives in a time where biofuel policies are highly criticised. It is expected to play a role in further discussions on the ILUC debate. Last week, a new iLUC study by the American researcher Timothy Searchinger was attacked for being based on weak evidence. The study ´Analysing the effect of biofuel expansion on land use change in major producing countries: evidence of increased multiple cropping´ was authored by Hans Langeveld, John Dixon ( Australian Centre for International Agricultural Research), Herman van Keulen (emiritus professor of Wageningen University and Research Centre) and Foluke Quist-Wessel (Agri-Quest). Our motto: more data and better analysis = less speculation!
This website uses cookies to improve your experience. Cookie settingsACCEPT
Privacy & Cookies Policy

Any cookies that may not be particularly necessary for the website to function and is used specifically to collect user personal data via analytics, ads, other embedded contents are termed as non-necessary cookies. It is mandatory to procure user consent prior to running these cookies on your website.